How We Dropped Cable

A couple of months ago we started looking at how we could save money on the things we really didn’t need so we would have money for the things we really wanted to spend money on. One of the things we looked at and thought we could do without was cable television. We were spending almost $70 per month on just the cable TV portion of our bill from Charter. Between the regular cable service, the upgrade to digital, then the upgrade to High Def with the cable card, it made a pretty significant impact on our budget. So we decided we would drop all of that and go with over the air HD instead for all of our live shows. We decided we would keep the Tivo so we could watch what we wanted on our time frame.

So, on April 15th, I twittered that I was about to drop cable and run far away from charter and it was twitter to the rescue. But a user named UMatter2Chtr2 sent me a message and asked if there was anything he could do to keep me as a customer. I told him that I would want to drop cable TV, but keep my phone and internet for cheaper than I would be paying if I went with someone like Bellsouth or TDS. So he dropped our service down to under $60 per month for both, with the 5 meg package for Cable, which is what I wanted. This way I didn’t have to worry about the change of providers and I have been relatively happy with Charter in everything but price. The next step was to figure out how best to get the HD channels on the TV’s at our house. We first tried an RCA Indoor Amplified Tv Antenna

that we had bought when we got our 20″ HDTV for the bedroom last spring. It got a few channels, but the reception was not that great so we would have lots of artifacts where it would skip and stutter. Needless to say, we were not impressed. Plus, that wouldn’t account for our larger TV

downstairs in the living room. So I started doing research on how we could everything we were used to getting with the same quality. I found posts like this on Lifehacker that were great, but not quite what I wanted.  It gave me ideas on what to do for getting shows after the fact, but not live.  I then started looking on forums to see what my best bet would be if I were to buy a higher powered antenna. At some point I had found a post that talked about a homemade antenna that they had built that worked as good, if not better than some of the best retail antennas, and it only cost about $5. So I watched this video and it looked too good to be true. About a week later, I built the antenna and hooked it up to the downstairs TV and it actually did work as advertised. I was super impressed. It still wasn’t perfect just because of the location in the house, but it came in so much better and was a whole lot cheaper.

Then i started thinking about how I could get all of the shows we had missed. I had an old media center computer that isn’t anything special (Athlon 64 3000+, 1GB RAM, 5 year old Nvidia video card) just sitting in our extra bedroom so I thought a good use of it might be to put it next to the TV and use it for watching videos, but wanted an easy way to watch those without having to deal with a keyboard and mouse most of the time. I also wanted to download shows easily so I could catch up on anything we might have missed. I have been torrenting for awhile, so the idea of downloading shows wasn’t foreign to me, but setting up the RSS feeds and remembering to look and see what has been downloaded and needs to be downloaded did not sound like a good time. I remembered Lifehacker talking about using TED to download shows automatically through your bittorrent client and thought I would give it a shot.  I use uTorrent for all of my torrenting needs. That coupled with the WebUI allows me to keep an eye on my downloads from anywhere I have web access. I started using TED and was very impressed with the amount of shows and the ease of use. So it looked like that part was taken care of. But I still needed to figure out two more issues, ease of use and 10 foot remote usability.

I have always been a big VLC fan just because it will open almost any file format you can imagine without having to fool with codecs, but I didn’t know much about using VLC remotely until I saw the VLC Remote app in the iPhone app store. At that point, my brain started churning to figure out how we could use that in our living room. I downloaded the app from the app store, then installed the setup assistant from here.  At that point, we were off and running. And not only could I control it from my iPhone or Sarah’s iPod touch, but it could be controlled from a browser window by just putting in the right URL. It was a beautiful day and it worked really well for us for the first couple of weeks we were living a cable-less life. We felt so liberated just to not be relying on Charter for watching TV anymore.

Then we had a few times where we would want to watch Hulu or ABC.com or CBS.com to catch up on something that wasn’t in the Torrent RSS feed yet, but we wanted to catch. So I started researching to find out what was out there that I could use to watch shows like this from my couch. I thought about using something like Boxee, but I didn’t want to have to think about doing things on Linux, and the Windows version of Boxee isn’t available quite yet so I was kind of stuck and we still would have to futz around with a keyboard and mouse.

About a week later, I just happened to pickup this post from Treehugger that showed how to turn your old laptop into a media hub. I watched the video, and wasn’t as amazed with what they did, as I was with a piece of software that they were using.  They were using an interface I had never heard of called Zinc TV. It was, and is, amazing. It works using a Media Center Remote and Receiver

to navigate, but is capable of watching all of my downloaded shows, as well as stuff like hulu, cbs.com, abc.com, youtube, and lots of other internet videos. And it works extremely well. We even got rid of our Tivo Subscription it is working so well for us, because the torrents and the web videos pretty much encompass everything the Tivo could do before, but without the monthly charge. We are still using this interface, and have been for over a month, and love it. So it looks like it may be here to stay, which is fine with me. The last thing I needed to figure out was how to get the best reception to all of our TV’s using this homemade antenna I had made. It wasn’t the prettiest thing so Sarah didn’t want it in our living room. And with all of the coat hangers hanging off of it, it wasn’t exactly safe, especially since we are planning on having a baby in a few months. So I talked to a friend at work and we batted some ideas around as to how to distribute the antenna signal throughout the house and came up with this as my preferred method. 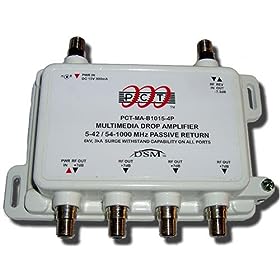 I would put the antenna in the attic where it would get the best reception and then distribute that signal throughout the entire house. Sounds simple enough right? Well, almost. The problem is that we have a 2 story house, and all of the cable inputs are on the other end of the house. So that meant I was going to have to send the signal from one end of the house to the complete opposite.  It meant I would have to get a pre-amp and an amp to pump up the signal. I bought a pre-amp that would sit within a few feet of the antenna. I bought a Dual Output Amp

so that I could send one end to the upstairs tv directly, and the other to the rest of the house via the distribution box. I also bought a 4 Port Amp

that would sit at the distribution box and feed the rest of the house. Those items coupled with 50 feet of coax

cable and some ends is all I needed to get this project going. 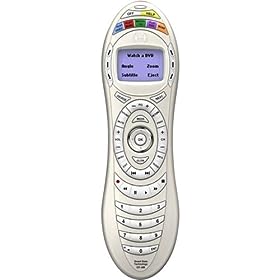 Yesterday the finale of this whole project came to a close as I finished things out and got it all up and running. It is working amazingly well and Sarah is extremely happy with how it works. The only thing she has to do now is flip to a different input on the TV whenever she wants to watch live TV versus anything through the media center. But with our Logitech Harmony Universal Remote

that I had never really used a whole lot, it is all setup to automatically change inputs on both the TV and the receiver by pushing a single button.

It is all working great, and I am really happy with the way it has turned out, plus it is saving us about $80 per month. I did have to buy a few things along the way, but since I had a lot of the electronics already like the computer and the remote, it still didn’t cost me more than a month of savings from our charter bill.